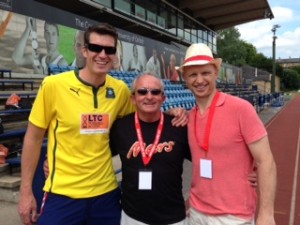 We were delighted to be asked to organise a sporting fundraiser for Oxfordshire High Sheriff Tony Stratton last month. Around a hundred staff from businesses across the county came to the world famous Iffley Road running track, where Sir Roger Bannister set his four minute mile. They were put through their paces in a n umber of sporting events and there were some famous face there too, as World Cup-winning England rugby player Matt Dawson and Olympic gold medal rower Greg Searle joined in.

Congratulations to the 26 Silver Star runners who ran the London Marathon and raised an incredible £60,000 to be shared between several charities.

Their team included 70-year-old Mike Stubbs, who completed the race in an incredible 4 hours and 3 minutes!

No doubt their success was in part due to Barry, who gave them a 90 minute pre-marathon briefing and his twenty top tips for the big day, which went down a storm.

We’re now working on turning the tips into a product … watch this space!

Members of Oxford business group B4 enjoyed a great evening at Blackwell’s in Oxford last month as they listened to guest speaker Peter Bennett-Jones give them an insight into his career as one of the most successful theatrical agents in the UK.

Why is that of interest to Prime Energy? Well, because Peter is a client of ours, as is the editor of B4 magazine, Richard Rosser. They both train in the same class and the speaking engagement was sorted and agreed during one of their classes …. Proof that you can network and get in shape at the same time!