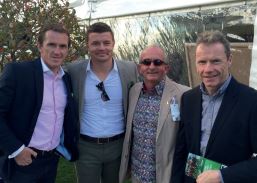 Every year Prime Energy books tables at the CLIC Sargent Windsor race evening – and this year was no exception. In fact, for the 10th anniversary of this annual charity event we took along thirty guests, who all joined in with the fun and contributed to the fund raising efforts.

It was a night of stars as those in attendance included champion jockey AP McCoy, rugby union captain Brian O’Driscoll, golfing pro Paul McGinley – and even Liam Payne, singer in One Direction!

Formula One’s Eddie Jordan, patron of the charity, said: “You cannot help but be touched by the stories of the young people and children with cancer that CLIC Sargent supports, which is why I am a proud and long-term supporter of this fantastic charity.”

The star-studded event was a fab night out for everyone and raised an incredible £650,000 for the charity. Well done to everyone who came along!