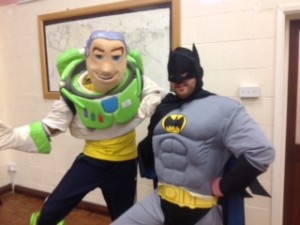 On Friday 14th November we did a special workout to raise funds for Children in Need. It wasn’t a bad turnout – though we’ve had better – but we still raised £180 for the cause.  The theme was Superheroes so I made sure Batman and Buzz Lightyear made an appearance, which everyone enjoyed. Mind you, I think Batman must have been on drugs, he had so much energy!

We also had one of the founders of Comic Relief in the room … After the class he said he’d really enjoyed himself. Personally I think he was researching for ideas for his next show from my 40+ years in the game…!

Finally, I am so proud of Molly Mary, who sold cakes throughout the day, at class and even in the pub afterwards as well as at the Saturday workout. She raised a staggering £191!!  Huge thanks to everyone who bought a cake, made Molly’s day and made an old man very happy. Cheers!